Many of us find it difficult to talk about death, dementia and terminal illness.  We can help you have those difficult but important conversations.  We can:

‘The worst thing you can do is to say nothing’ 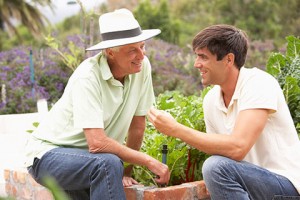 Having a difficult conversation

Having an initial conversation with a spouse, parent or partner who may be showing signs of dementia is not easy.  It can be difficult to confront what appears to be too big a problem to manage.  But it is a conversation you need to have.

It’s important to let them know you’re concerned and that you understand that talking about some things can be difficult.  Ask them if it’s OK just to talk about what’s worrying you.

If they would like to, they can then tell you what is worrying them.  Emphasise that it won’t change things between you and that it’s important to share your fears and concerns.

Perhaps you have come to terms with an illness but other family members and friends are finding it more difficult.  This can cause problems if you want to make plans for the end of your life but your family are unwilling to acknowledge that you are dying.

Talking about death, dementia and other illnesses can be difficult and distressing.  Starting the discussion requires courage as you may be worried about the reaction you will receive.  Equally, being afraid to acknowledge the truth can be a huge burden.

It can be an enormous relief for everyone to have an open and honest conversation during which you all of their fears and concerns can be expressed and addressed.

It is possible for everyone to die with peace of mind if they make a conscious choice to do so.